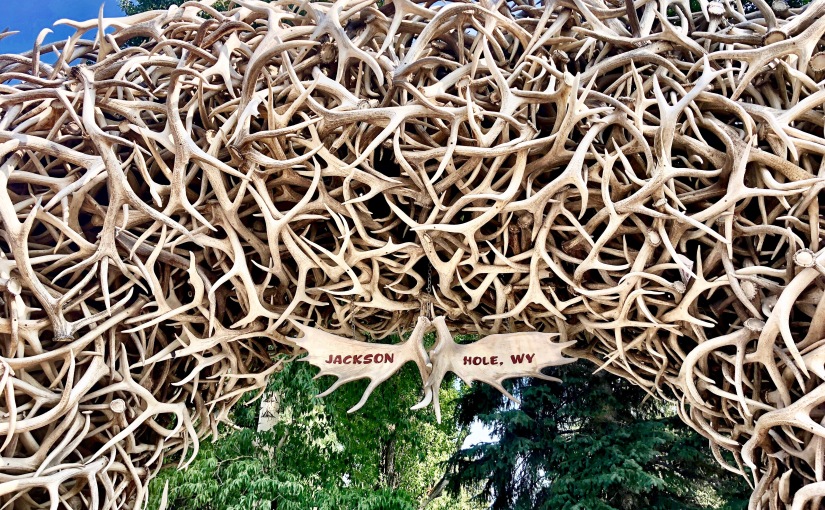 Jackson is a town in Wyoming (there is also a Jackson in Mississippi, of course; I accidentally reserved a campsite there and never got a refund; grrr).  Jackson Hole is a valley that encompasses several towns and outdoor spaces between the Teton and Gros Ventre mountain ranges, Jackson being one of them, at the south end of the valley.

After my visitors went back to Portland, I decided to settle in to the area for a few days.  I’ve found myself most at ease when I’ve gotten to know and explore a space for more than just a couple of days.  That’s when I’ve really learned about the culture and people (and gotten to know one or some of them too).  And, I crave that settled feeling in general in life, out here maybe even more than back home.

So I went to the library; I went to the movies.  I went to lunches and dinners with my new friend Jim.  I even watched some TV!  I hiked and camped and sat and read.  I explored…and did LOTS of people-watching.

I came to Wyoming with some stereotypes about the place and the people (newsflash: we all have them).  I also began my journey saying “If I decide to move away from Oregon, I bet it’s because I fall in love with the wide open spaces and big skies of Wyoming or Montana…” so those stereotypes were a mixed bag, certainly not all negative.  I did sort of expect I’d be walking into Trump Country, so to speak, and I’m not sure I didn’t, but it didn’t feel like I thought it would feel.

There was a definite small town, rural, country feel to most everywhere I went (not surprising, given the ranches and farms that dot the area).  I wish I could have plucked all the tourists out of Jackson and just observed the locals…but they were certainly easy to tell apart!  The locals looked like, well, home to me.  They wore plaid and flannel and belt buckles and work boots (not like the ones folks wear to country concerts to look the part but the kind that are steel-toed and well-worn; in other words, ones that are actually functional and worked-in).  There were also a lot of cowboy hats.  Those were harder to tell fashionable from functional, I must admit…

I felt like I was surrounded (minus travelers) by hard work and common sense.  Parking in Jackson was free.  The rules of the road seemed…sensible.  I made a U-turn once and knew I’d never get a ticket for it.  It was safe and functional, and these people seem to appreciate function over form.  It was refreshing to not be surrounded by wanna-be-hipsters who mock me for drinking Coors Light (whilst riding skateboards with cats perched on their shoulders).  These folks get me (and I get them), even if we vote much differently…and I’m coming to appreciate that – commonality that goes above and beyond politics.  (Don’t get me wrong; I love Portland, but I also value common sense and pragmatism, some of which seems to be missing there…)

I could go on and on about the thoughts I had and observations I made and thinking the area and people and learning there made me do…but I won’t.  I’ll just say there’s good stuff and there are good people in every place I go.  That’s a beautiful momento for me to take away.

(The picture here features one of the four elk antler arches surrounding the town square in Jackson.  Jenna – the vegan – asked me “Do they kill elk for their antlers?”  I responded as best I knew how: “No, I’m sure they kill them for other things – meat, etc. – and the arches are a byproduct.”  I was wrong though.  Upon further reading I learned that elk in large refuge area near Jackson shed their antlers each year…and local boy scouts collect them to be featured in the arches, which have become a fixture of Jackson’s identity.)